Comparison of fuel prices in Austria by federal state

Research Coding
David Pertiller
350 Hits
0 Comments
The new update of "Spritpreise AT - Clever Tanken" contains a federal-state comparison with the average prices per "Bundesland". It also shows the currently cheapest and most expensive federal state.
Example of the current price difference: On average, diesel prices in Burgenland are at the moment 6.3 cents cheaper than in Vienna. 🤔
The app takes a total of 2700 gas stations from all over Austria into account. ⛽️ 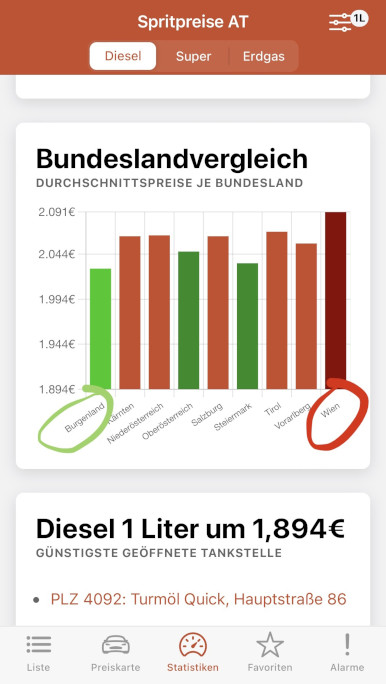 A side note: it is difficult to derive the federal state from an Austrian postal code systematically. For example, postcodes beginning with 5 are not automatically within Salzburg, but can also belong to Upper Austria. For the relatively small Burgenland, where most postcodes start with 7, some start with 2 (Lower Austria) or 8 (Styria). Lower Austria even tops this diversity...

If anyone wants to know the exact mapping of zip codes to federal states, here are JSON files that I made available as open-source on GitHub:

Want to dive into the stats directly?

No comments made yet. Be the first to submit a comment

We use cookies on our website. Some of them are essential for the operation of the site, while others help us to improve this site and the user experience (tracking cookies). You can decide for yourself whether you want to allow cookies or not. Please note that if you reject them, you may not be able to use all the functionalities of the site.